When the brilliant actor Brad Davis died of AIDS in 1991, Hollywood went ballistic. Although it wasn’t a suicide, he left a note that detailed his extreme unhappiness, especially in relationship to the nature of his death, certain that the town where he’d made his mark would rebrand him. Six years and how many red ribbons later, Hollywood had grown hoarse bemoaning its losses but in reality it was business as usual. It took Davis—from his grave, metaphorically, to say it: The entertainment capital of the world remained an unsafe for anyone who had HIV/AIDS.

The talk shows were scrambling for a Gay HIV+ actor with credibility to appear on one of the morning talk shows. The rumor was that the actor who had spoken publicly on Nightline (and other shows) when Hudson died was HIV+: Michael Kearns (known as Hollywood’s first openly gay actor, for the record).

“It was the first time (and the last) all three networks were vying for me,” he says, laughing about it, thirty years later. “Wanted because I was a tragic figure.”

He would break the news of his status on NBC’s A Closer Look with Faith Daniels, a highly rated show, appearing with Brad Davis’ widow. It was shockingly emotional for a daytime talk show. Daniels reached out and touched him—a gesture that was repeatedly written about in the press. The Los Angeles Times was in the Green Room waiting for Kearns when he came off the set. The next night he was the lead story on Entertainment Tonight.

“That is what’s so impactful about Billy Porter. He is a major star with a huge following and a following of young impressionable people of all stripes who just might follow his lead. AIDS has not gone away. And in certain communities, communities of color, it continues to devastate. Billy’s announcement is heroic.

Thirty years after mine. Thirty six years after Rock Hudson died. Is Hollywood a safe place to have HIV? You tell me, honey.

“We’ve recently dealt with Covid. Did it stigmatize people the way HIV/AIDS did? Doctors and nurses were snuggling up to their Covid patients, separated by only a mask. Imagine the shenanigans that went on with AIDS patients— those who could be treated.

“There have been enormous strides, enormous, with AIDS. And I realize that young people might not have to take it quite as seriously as my generation but it remains an issue. If you have any concern for the larger picture of the LGBTQ population, if you have any concern for those in the world (not only in America and Hollywood) who aren’t white, gay males, AIDS is still a monstrous killer.”

During the three decades, Kearns has established himself as one of the strongest theatre voices in Los Angeles: actor, director, producer, teacher. He is also the proud papa of a twenty-six year old daughter who he considers the “most important accomplishment of my life.” 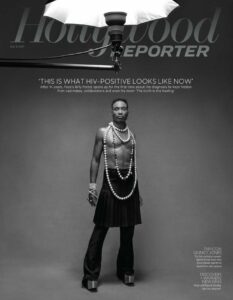